Something isn’t quite right here…

Robbie Keane has the ability to be a prolific striker. With the MLS ever changing and evolving into a very entertaining league, a character of his stature and goal scoring ability should light up the west coast and completely kick start his career.

There is no doubting this, his 91 goals in 238 games for Tottenham is a record any striker would like. Something that Leicester City would have loved to have cashed in on (and they still might if the transfer didn’t go through before 5am). But L.A. Galaxy might have stretched themselves a little too far.

Wages rules in the MLS is as protracted as most American sports are with a salary cap. They can however nominate up to three players who have high earning wages. These are known as the “designated players”. No guesses who L.A. Galaxy’s three designated players are. David Beckham, Landon Donovan and Juan Pablo Angel. Angel seems to be the one player everyone thinks will go. He came in during the 2011 Draft to Galaxy after NY Red Bulls decided not to renew his contract and Philadelphia Union look set to get him.

But the transfer deadline in the U.S. has now passed. So no one can go. Landon Donovan is forever being linked with a return to the Premier League, although I seriously doubt he would go on anything but a loan deal. Then there is David Beckham, considering his future at the club and within football. He will always be a brilliant player but his fitness is concerning him after the Achilles injury last year and this season has looked, at times, uncomfortable.

You would think that part of the cherry for Keane going, other than the money and hollywood lifestyle, has to be Beckham’s awesome delivery. Keane needs all the help he can get with being set up for goals, as his stint at Liverpool and West Ham proved that he is not an effective lone striker, and with Beckham gone? Who’s going to do it?

Watching Galaxy can sometimes be a bit like watching England. Brilliant yet agonising. We all hope that Robbie Keane can find a team, play games, and get back to his best. No one wants to see the loveable Irishman crash and burn. But unless he gets the service, I fear his time at Galaxy could be more American Beauty than American Dream.

So I have just watched series one of The Walking Dead. I must confess that I haven’t read the comic books so whatever thoughts I have about this stem directly from the series.

What do I think about it? I thought it was good. It was some fun entertainment but it does have a lot of problems (possibly teething problems) that need to be addressed in series two. Although having a longer run of episodes might help that. 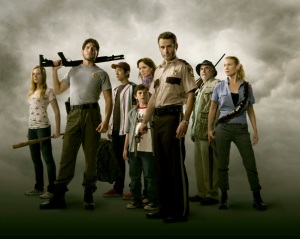 My first problem is the whole coma thing. A guy wakes up from a coma and the world has gone to shit and the streets are deserted. It’s completely 28 Days Later in that respect, but in all honesty there probably isn’t a better way to drop a character or the audience into that situation. Nothing new but it is tried and tested.

Problem number 2. Wooden characters. I know that these characters may be in the comic books. But the definition of good and evil stretches quite easily in comics. While a guy can be an arrogant redneck racist (Merle) in a comic and get his just desserts, on television the character just comes across as stale and out of date. The Jim character is basically introduced to be killed. The whole grave digging and sunstroke angle is designed for you to feel empathy for him when he gets bitten. But he’s not needed other than to show dwindling numbers in the group. I’m surprised that the character wasn’t cut when they trimmed the fat, so to speak.  Again this goes for the guy who hits his wife and gets beaten up. His only purpose is to show how unstable Shane is becoming with Rick’s reappearance. Even Shane’s actions when he attacks Lori are pretty poor. It’s meant to aid the tension that will build between the two but instead of making you hate the character, you kind of hate the show for making the character do that. I may be spoilt though, when you see some of the characters (and actors) that are really multi dimensional from other current shows such as John Luther (Idris Elba) from Luther,  Tyrion Lannister (Peter Drinklage) from Game of Thrones and Nucky Thompson (Steve Buscemi) from Broadwalk Empire.

However, I’m not all about the negative. There are several things that are really good about the show (which is probably why the lower points annoy me so much). The first episode with its feature on Morgan and Duane Jones is brilliant. The whole scene where he’s crying, shooting Walkers from the window after putting a picture of his wife up is absolutely beautifully acted and written. Genuine humanity there. Also, the character of Dale. In the last episode after Andrea decides to stay, his choice to stay is well acted. You can see how much of a betrayal he considers it that she would be so selfish as to rob others of her life. The entire last episode, where you finally get some answers, is very well done and you get a sense of the show progressing beyond the characters basic survival into something greater, as well as Noah Emmerich’s great guest starring role. By the way, I score huge geek points for getting the reference to the Wildfire complex*. Finally, the series itself is wonderfully shot, beautifully constructed and the make up is incredible. There is always a certain foregone conclusion when it comes to zombie movies that they are either comical or scary. This thankfully does neither and is all the better for it. The Walkers themselves are a nice combo between your run of the mill ‘zombie’ and the super fast terrifying ‘zombies’ of 28 Days Later and I Am Legend.

All of this does make me want to carry on into the second season. Now that the camp is unsettled, more knowledgeable and on the run, it does lead the show into some potentially great territory. Let’s hope it carries it forward and leaves some of the poor characterisation behind.

*Wildfire is the name of the top secret underground laboratory in Michael Crichton’s The Andromeda Strain. Originally designed for chemical warfare experimentation, it was used to try and find a cure for the spreading Andromeda epidemic.

Tiny Tower for the iPhone. Addictive… No. Needy… Yes.

It’s like a Tamogotchi, except you can’t needlessly mistreat it. I may have to delete it soon, but I feel strangely compelled to find out what stores I will get if I carry on building. No way am I buying bucks for it though. Not even I can justify paying to get extras. The best bit about it, I find, is the “Bitbook” Facebook rip off where your tower dwellers say similar things about work all the time. But occasionally they branch out, as seen below (Nice one Victor Beck). 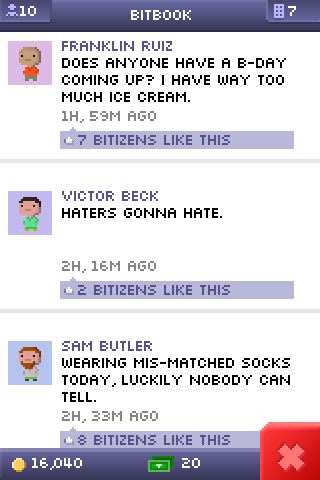 In other news, today I will try to 100% all of Lego Star Wars (I have to admit that Mass Effect, yet again, bored me). So my only condition is that I must play all the way through with Admiral Ackbar. Maybe he can give the other characters some warning as to impending doom.

Ok, so Minecraft isn’t my favourite thing. But playing it and seeing my friend stare out this Creeper through a window cracked me up. It’s like the fish tank scene from Romeo & Juliet… No?

I have a choice of three games to play at the moment and I can’t decide which I want to play.

Having just completely completed Lego Harry Potter, I want to do the same to Lego Star Wars and especially unlock Admiral Ackbar. Mainly so I can laugh at myself for shouting “It’s a Trap!” in every confrontation. But I get the feeling that it’s far too much Lego for one man to endure.

A game I’ve started and never really bothered to continue. My main reason? I forget what I’m doing and really despise being over encumbured. I have no idea what there is that is actually useful, so I keep what I can and sell it when I can. But I end up having to dump most of it. It infuriates me.

I’ve started Mass Effect. My friend raves about it. In all likelihood, I should love this game. It’s Sci-Fi, big, immersive and has a great story. But for some reason I just cannot drum up any enthusiasm about it. It just bores me. It’s almost too big maybe? I can’t explain it. Everyone’s talking about Mass Effect 3 and getting excited. I still have Mass Effect 2 in it’s cellophane wrapper. I just can’t get any fun out of playing it. Maybe it’s just me.

I’ll give Mass Effect another go I think.

This is my new website! Exciting huh? Well hopefully it will be a place where I will write and do stuff that amusing, intrigues and entertains you as well as keeping me occupied and being an official place for stuff about me with me in… Or something like that.

At least I hope so seeming I’m paying for the domain name.

So welcome to seancleaver.net. To start with, I’ve loaded some old stories and some Games writing pieces as well as links to my portfolio of published work and a showreel of my stuff so far. There’s more to come eventually too as well as, hopefully, a slightly tidier design.

So enjoy everyone, and I’ll upload more as it comes to me.