Well. What a week.

It’s always hard to do anything at all in life when life gets in the way. Last week, life majorly got in the way of all dissertation related endeavours. I do now have a supervisor for my project and the few people that have asked really like the story idea so hopefully, this will come off well. So I flew in to this week with commitment and confidence that only life could ruin… Well life and whatever tawdry low-budget tosh my friends have cared to tape from the Horror channel and play over take-out and friendly banter. Which is where this weeks journey began. Shortly followed by finishing some sketches and one lines for BBC Radio 4 that didn’t get used. Sad face.

Fast forward to Monday. 5am. Awake. I’ve never got up that early on purpose unless to catch a flight. But this time it was to meet one of the heroes of my, and my friends, life. The actor, bodybuilder, writer, businessman, politician and Austrian (that counts), Arnold Schwarzenegger. Early morning rises are not fun at the best of times, even less so when having to stand outside Waterstones in Piccadilly from 7:30am and only just make it into the queue. The man at the front had been there since 7pm the night before. 12 HOURS! I can’t imagine that, as the one thing I would not want to do when getting Arnie to sign my book is smell like I’ve slept on a London street overnight. But we got in, were rushed along with hardly a hello or a handshake, got our book signed, ate a burger and left. But it was totally worth it. Here’s my good friend Charlie (@brownsell) getting his book increased in value. 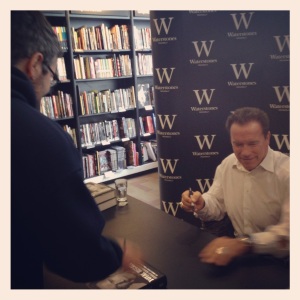 Later that day, via the medium of twitter and random contacts, I had a small open spot doing stand-up at UCL for Tuesday. Obviously whenever I do any comedy I always feel completely nervous, way out of my depth and a complete phoney. But that’s half the fun. It went quite well, the other acts were astounding (Tony Law a particular highlight) and I survived. However I was doomed to get the last train home (1:30am). Bearing in mind I had to be back at LMU (which I’d just spent half the night criticising) for 10am, I was one sleepy Sean. Panda eyes in full effect.

So, lets be honest. Going out drinking with friends after lectures, watching the England game and being out until 10:30, really isn’t a great idea. Especially when you have so much reading to do and writing to think about and after I’d just started a new gym regime. So I spoilt that with Nando’s and alcohol. But I still felt pretty good going in to Thursday. Back to the gym and then to a hospital appointment was the plan. I’ve recently been in hospital for an operation so I had to have a check up. Positive: Got to read a crap load of a book whilst waiting to be seen. Negative: I had to wait for an hour only to get crappy news and have nothing except the crappy book I had to read. This completely ruined my day and brought back a lot of other problems. Life yet again throws a curveball (baseball reference – see I’m learning).

Friday however was fairly ordinary and life did nothing but plod along taking me in its wing for lectures, a lot of reading, meetings, home and gym. Which led to Saturday where gym also occurred as well as some reading. But in the end, it led to many friends on my bed, lots of drinking, a terrible hangover and yet more sobering realisations that I probably, and very dangerously, vomited in my sleep. Not cool. Fast forward to Monday (now) where I am documenting the week’s distractions, which in itself is a distraction from reading more university stuff and researching. I’ll catch up this week before an AWESOME NFL WEEKEND!